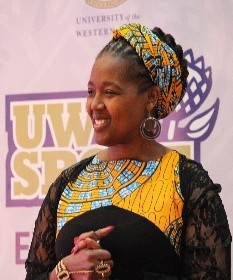 Pamela completed her Matric at Inanda Seminary in 1984. Her notable involvements, among others, are that she served as a prefect for all years of study and school bell ringer, including chapel bell ringer. She won the second prize for the school in 1984 at the Alan Paton Literary Competition with her poem, ‘Who am I?’. She pioneered volunteer support services for sick members admitted at the campus dispensary, as well as writing plays and performing choral music.

Her career after school:

Pamela‘s career includes academic, research and senior administrative leadership roles at the Universities of Siegen, Natal (Pietermaritzburg), Johannesburg, Kathmandu (in Nepal) and Wits. She is also a past employee of the National Department of Education (Higher Education Policy Unit) and the South African Nuclear Energy Corporation (Necsa) where she set up an International Relations office as well as managed the Learning and People Development unit.

- “We Appear Silent To People Who Are Deaf To What We Say" Women of Colour Speak Out. Published in Selbst und Andere/s – Self and Other –Soi même et l áutre: Von Begegnungen und Grenzziehungen, Issue 7, Beitraege zur Kanadistik, Wissner, pp. 41 - 53:)