The 2022 At Home was a celebration of our current matrics who, despite the many challenges of the past few years, have done us proud academically and in many other ways. It was also an opportunity to reflect on an important aspect of Inanda history, the role of the Power of 10.

Celebration of the Power of 10 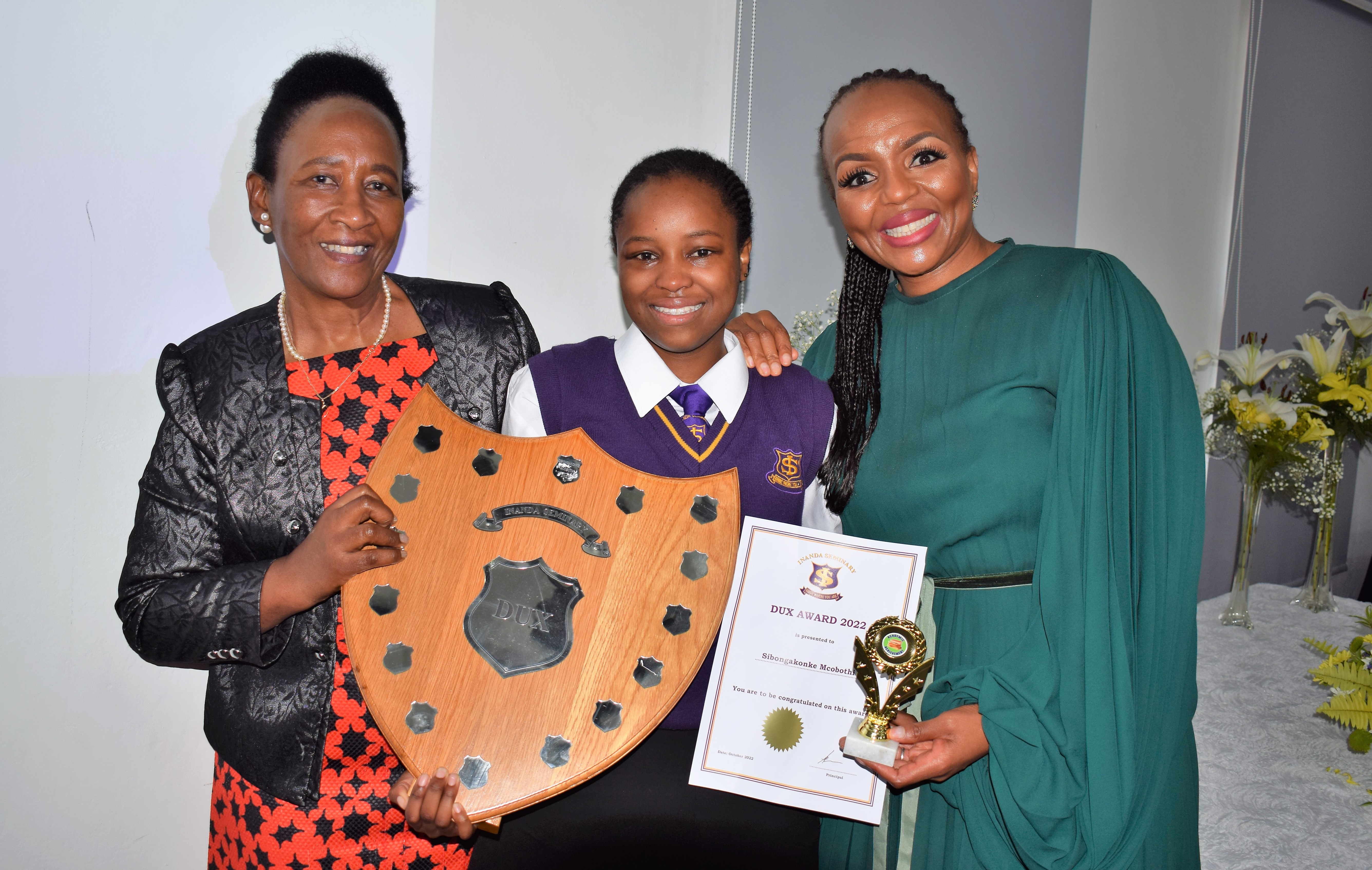 2022 Dux Sibongakonke Mcobothi
together with Mrs Gugu Khumalo the Chairperson of the Board of Governors and Ms Zama Mkosi the guest speaker.

The Deportment and Uniform Award

The Deportment and Uniform Award is bestowed upon grade 11 students who are well-groomed, who carry themselves well, and wear their school uniform with pride.
This year’s recipients are:

We celebrate the achievement of students who excel in their chosen codes of sport and who have earned their provincial colours. We salute them for their perseverance and dedication to their codes.

All Round Achiever Awards

The Inanda Seminary All Round Achiever Awards are conferred on one student in each grade from Grades 8 to 12. These students embody the goal of the school - that is, a balanced, well-rounded education for all Inanda students with academic achievement being balanced with achievement in extra-murals through sport, clubs and service. The 2022 All Round Achiever Awards are as follows:

Grade 8
This year’s grade 8 winner represents the school in Soccer, Athletics, Cross Country as well as debate junior league.
She is a polite and responsible student who is also a Vice Class Captain.
Academically, she has performed consistently well throughout the year and is in the Top 10 of her grade.
Zinzile Ntombela

Grade 9
This year’s grade 9 winner represents the school in Athletics, Cross Country Netball, Volleyball and Action Netball.
She also received a gold medal for Action Netball.
She is the class SRC representative
.Academically, she has performed consistently well throughout the year and maintained her place in the Top 10.
Thembeka Ndlovu

Grade 10
This year’s grade 10 winner represents the school in Netball and Action Netball.
She also received a bronze and gold medal for Action Netball.
Academically, she is in the top 10 of her grade.
Sanele Mlaba

Grade 11
This year’s grade 11 winner represents the school in Softball, Netball and Touch Rugby.
She is a member of the blood donor team
She is a participant in the Wits Targeting Talent Programme.
Academically, she has consistently been in the top 10 of her grade.
Sinqobile Shezi

Grade 12
This year’s grade 12 winner is a committed, dedicated team player who excels in long-distance running. She represents the school in Athletics, Cross Country and Netball.
She represented KZN in Cross Country since her inception into the school i.e. grade 9 up to and including this year
She is a member of the Sports Committee
She is the captain of the school’s athletics team.
She is a very determined, competitive sportswoman.
Academically, she has consistently been in the top 5 of her grade.
Sinothile Zondi

The Red Letter Bible Award is conferred on a senior student for service, character and influence.
This member upholds the core values by displaying respect, self-discipline, honesty, loyalty, sociability and responsibility. Her leadership responsibilities include the following: Vice Class Captain, and member of the Campus Care Committee.
She is ever willing to help the younger members with academic and social issues. She carries herself with decorum befitting an Inanda student. She exhibits the utmost respect to members and the boarding, admin and academic staff. She is a good role model to her peers.
She assisted new Inanda Seminary members at the airport, particularly those who were boarding a plane for the first time.
She represented Inanda Seminary at “The Girl Talk” which was held at Durban Girls College
The 2022 Red Letter Bible Award goes to Londiwe Skosana.

The Jane Sibisi Award is presented by the Boarding Staff to a senior student for exemplary behaviour, courtesy, helpfulness and service above self.
The member displays exemplary behaviour and leadership skills at all times whilst attending to her duties and responsibilities.
She is courteous and has a positive and respectful relationship with her peers. In addition, her communication skills enable her to be of assistance to her peers.
Her helpfulness is displayed through her willingness to work with boarding staff and members and for being able to discuss boarding matters during the CONNECT sessions.
She displays Service above Self through her willingness to go the extra mile when needed. She leads by example and she stands for what is right.
The recipient of the 2022 Jane Sibisi Award is Amahle Ngqulunga.

The Principals Award is conferred on a senior student who has shown great resilience from grade 8 to grade 12.
This student has displayed the ability to bounce back timeously, despite all academic challenges.
She has shown a positive outlook in all her endeavours as well as a willingness to persevere.
The recipient of the 2022 Principals Award is Tatenda Shangase.