The 150th birthday weekend was a vibrant, moving and inspiring celebration of 150 years of commitment to the development of young African women.

This SABC News item sums up some aspects of the weekend.

But there was so much more to the weekend as it included a richness and depth of expression from so many points of view.

Paying respects to the Founders in the Cemetery 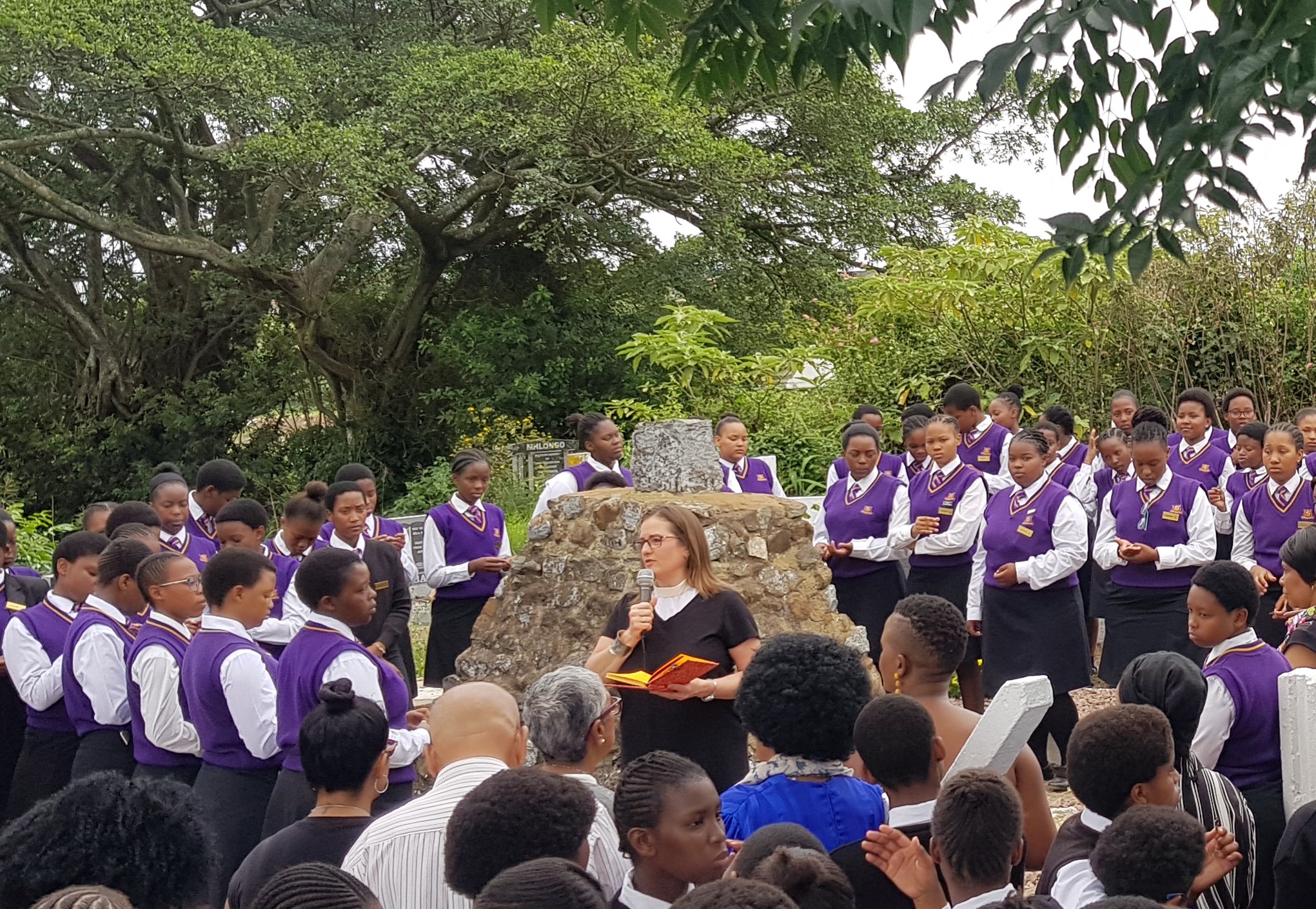 Friday 1st March saw the whole school walking up the hill to the nearby cemetery to pay respect to the founders and others who were important in building the school from its earliest days. Notably, Reverend Daniel Lindley Hatch, the great-great-grandson of Daniel and Lucy Lindley who were the missionaries who started the Seminary in 1869, was in attendance. Standing next to the stone-built grave of Mary Edwards, the first principal of Inanda, Reverend Susan Valiquette, the former Chaplain, visiting from the USA, preached on the importance of respecting our ancestors, those who have gone before and prepared the way to enable us to become fully who we are. Each person was given two puzzle pieces, representing themselves and their ancestors, and the necessity for us to join these aspects of our lives to be fully human. 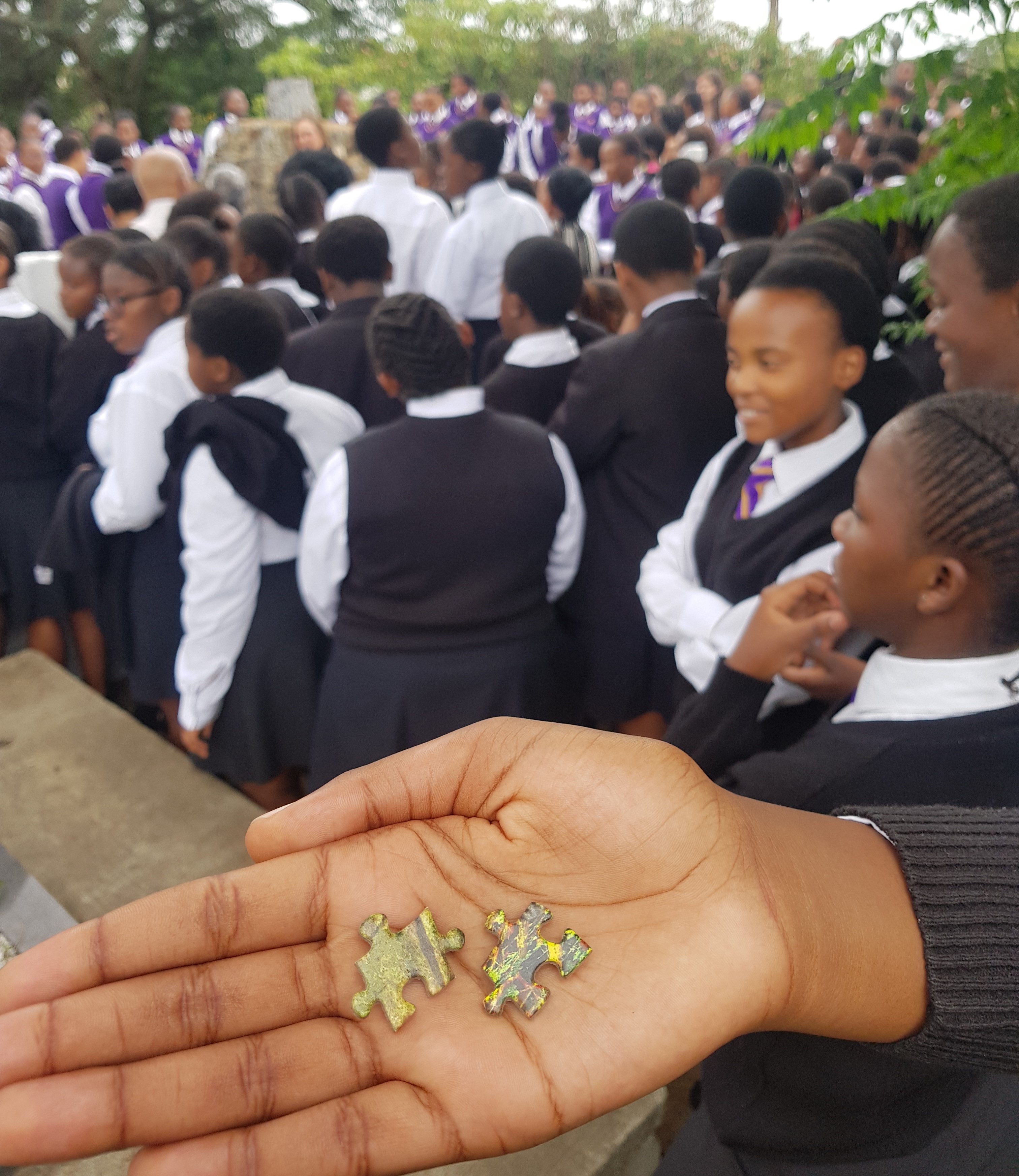 Dr Lynette Hlongwane, a former student of Inanda Seminary, spoke about her research conducted by interviewing other alumnae. The title of her PhD thesis is: "The Role of Inanda Seminary in the Education of African Girls in South Africa: Graduates’ Views." She is a celebrated author, teacher and lecturer.

She spoke about her own experience of attending the school, and not realising that she was receiving an education that was special, and that was imparting the Inanda Seminary DNA to her, preparing her for a life of significance. She went on to define what the DNA is. It is a spirit of resilience and determination that leads the women graduates of Inanda to be independent, confident and determined in the face of difficulty. 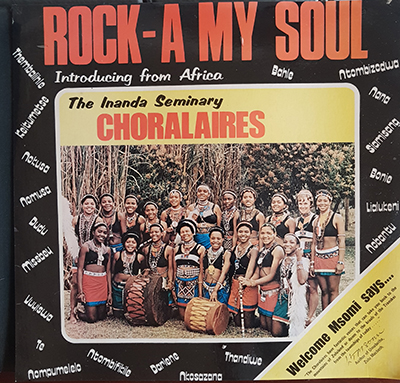 The Choralaires was a singing group made up of students from Inanda Seminary who were led by Darlene Aylard (now Woodburn) in the early '70s. They were very successful at the time, and even made a record, Rock-a my Soul. Amazingly, the group reconvened for the 150th birthday and performed some much-loved tunes, led by Darlene herself.

Trailblazers: A Celebration of Phenomenal Women

Completing the evening's entertainment, current members of Inanda performed Trailblazers, a production which blended drama, dance and singing. Scripted by Kim Simons-Thebe, the storyline featured current students being led to understand the significance of the school and all that it has stood for over the years.

This video is a brief synopsis of the developing mission of Inanda Seminary from its earliest days until the 1950s - it formed part of the production.

Saturday 2nd March was the day of the birthday celebration which was held in the school chapel. Attended by the school, as well as hundreds of alumnae and friends of the school, it was a joyful and moving celebration of the many committed people who over the years have built up the school. There was much glorious singing, and members from all grades spoke eloquently when introducing speakers, giving the school history and reading.

Barbara Masekela, who was due to speak, was unable to be present due to illness. However, a tribute to her was read. In her place, Mavis Mitchell Lambert (nee Xulu), who was in the Matric class of 1951, spoke with humour about what it had meant to her to be an Inanda student. Her theme was the importance of love, the kind which is found in deeds and action rather than mere words.

She was followed by Esther Sibongile Sangweni  (matric class of 1969) who pivotal in motivating the "Power of 10" group who saved the school when it was faced with closure the late 1990s. She spoke about the many challenges that faced Inanda Seminary over the years. She reflected on the fact that the founders and all who followed based their actions on a solid foundation of prayer. She celebrated the resilience and determination of the many school leaders over the years. She pointed out that the Mah Edwards hymn needs to be sung with deep reverence as it was written for Mary Edwards' funeral. Her speech can be accessed here. It can be freely used, but appropriate acknowledgement must be given.

The final speaker was Lindokuhle Ngwenya (Matric Class of 2010). After studying at Inanda, she received a scholarship to study in the USA. She is currently a management consultant with Africawide Consulting. She spoke about her journey from humble origins to where she is now, and praised the Seminary for the way it had moulded her and made it possible for her to make use of the opportunities which it opened up for her.

The Choralaires performed once again to tumultuous applause, as well as the school choir.

At the conclusion of the service, the opening of the newly-completed eNtokozweni (place of joy) took place. This is a space where parents and other visitors to the school can meet with students, and where classes can be held when teachers want a bit of a change of venue. In this photo, the three guest speakers, Mavis Mitchell Lambert, Esther Sibongile Sangweni and Lindokuhle Ngwenya are seen opening the new building. 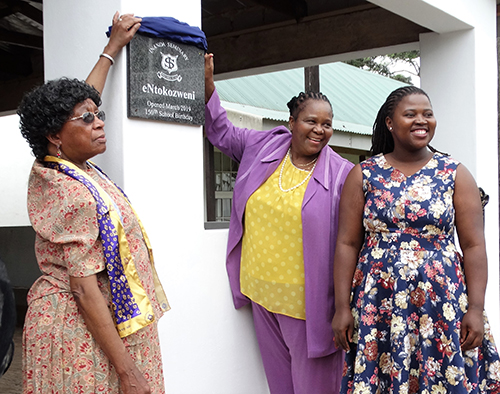 Then there was lunch on the lawn for the many guests.

The final event of the weekend was a Chapel Service at which Rev. Dan Hatch preached. He spoke of the courage and determination of the Lindleys as they made their way to work in South Africa in the 1830s. He showed us a man who was at home with himself, at one with nature, clear about his calling. He also spoke about Lucy and the difficult time she had as a child, suffering under her abusive step-mother. In bringing them together, God clearly valued their resilience and knew what was needed for the years ahead. He also challenged the conventional view of the Trinity, pointing to instead to a God who is embodied in nature, in our very bodies and our breath.

Click the image below for a gallery of photos from the weekend.

A beautiful coffee table book, Shine: Inanda Seminary Celebrating 150 Years, has been produced to for the 150th birthday of the school. Featuring anecdotes and images from the school's past, particularly the last 50 years, the book is a wonderful tribute to Inanda Seminary, the place, the people and what it has stood for over the past 150 years. Click here for more information and details of how to purchase the book. 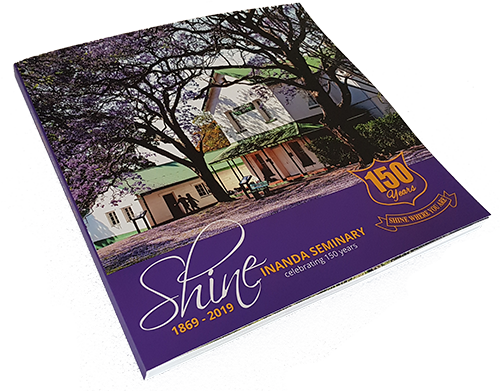 Independent on Saturday: Inanda Seminary: On a mission to teach girls 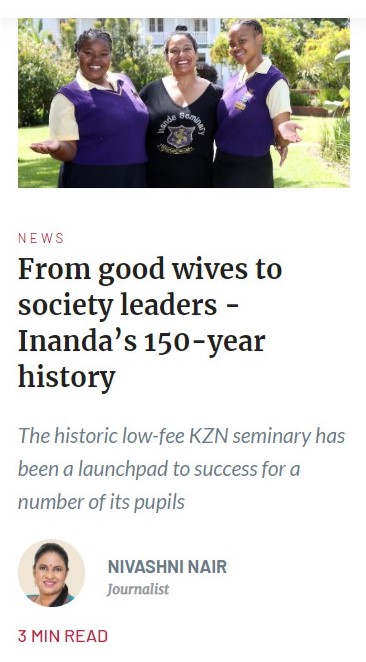